Cinnamon and banana, what’s not to like? Which is what I was thinking when I made the other night. These are simple little biscuits, with a soft and melty texture and a comforting flavour. They remind me of banana bread or banoffi pie, they could be lovely with a spoon of vegan vanilla ice cream. I like mine with a glass of cold non diary milk.

These gluten free banana yummies are easy and fast to make.

First preheat your oven to 155C/300F and prepare a baking tray.

Grab a medium sized mixing bowl. Put in your coconut oil and tahini. Mix these together until they turn soft. Stir in your almond extract. Pour in the agave and put in the coconut sugar. The coconut sugar should dissolve a little in the mixing process. If you are using vanilla extract or pods put the vanilla in now. 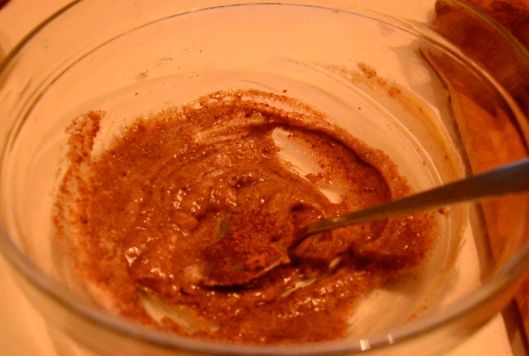 Add in your mashed banana mix again. I don’t like to have it perfectly evenly mashed. There’s something fantastic about coming across lumps of banana in a cookie! 🙂

Get another bowl and for your dry ingredients. Start with the ground almonds first, pressing out any large lumpy bits. Add the fine maize meal,salt,cinnamon and vanilla powder. Make sure they are well combined and add to your bowl of wet ingredients.

Give it all a good stir, folding, pressing and mixing all the yummy stuff until it becomes one soft lump of potential cookies!

Yummy lump of potential cookies- bananas sneaking into the shot

By the teaspoon put the dough onto your baking tray. Give it a press so it spreads and is a few mm thick (tenth of an inch). This oddly made nineteen biscuits. Maybe if I had tasted the dough a bit less there would have been twenty. After twelve minutes I turned the baking tray around the other way. They were done at fifteen minutes in my fan oven. They may take an extra couple of minutes in a non fan. The cookies should be a golden colour and going brown at the edges. Your kitchen will smell delicious.

The cinnamon is very subtle in this recipe. It just lends a background warmth. if you would prefer it a little more noticeable you could make it a third of a teaspoon.

Let me now what you think. You really can’t go wrong making these. Xs Aissa 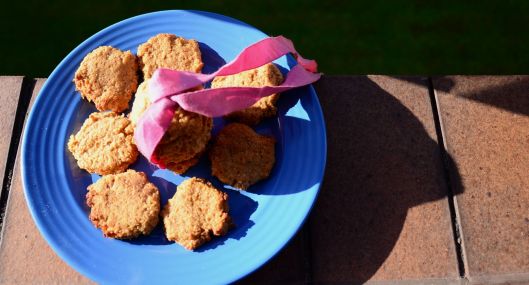